If you live in New Jersey, you’ve heard all the jokes, everything from “What Exit?” to all the Snooki wisecracks, but here’s the real ‘situation’: New Jersey is one of the best locations for bird watching in the United States, thanks to the Atlantic Flyway. From the northern Skylands near the tristate border with New York and Pennsylvania, to the southernmost point of Cape May on the Delaware Bay, New Jersey is a year-round birding hotspot.

In the spring, there is no better time to get out and see the Warblers. For those not familiar, Warblers are neo-tropical birds  that winter in Central or South America and then fly North to as far as Canada with stops in New Jersey to fuel up on bugs and spiders, while resting before hitting the ‘road,’ to continue the journey on to their breeding grounds.

For a photographer, Warblers can be the most rewarding and most maddening birds you will ever take shots of. They are both erratic and fast, as well as tending to hang out on tree-tops. However, when you do lock in on a Warbler, you’ll see birds in a variety of amazing colors. Warblers range in colors from yellow, blue and orange to red, green, black and white.

On any given outing, I can expect to shoot over 1500 frames, and look for 3 to 5 perfect images. I’m looking for everything from detail, sharpness, bokeh, and contrast on both my subject as well as the habitat I’m shooting.

For birds like Warblers, I prefer using Sigma zoom lenses over  prime lenses for their flexibility in the field. In many instances, you don’t get a second chance to move your shooting location. With regard to performance, the 60-600 Sports easily handled it’s business with its fast autofocus acquisition, bokeh & contrast.

Next time you think of New Jersey, forget all the jokes and reality TV nonsense, and think about the amazing variety of birds New Jersey offers for the wildlife photographers. 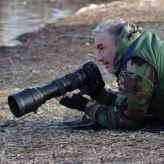 Stephen Michaels is a bird and wildlife photographer. Stephen’s love of being creative started with music, studying jazz-rock guitar at the prestigious Musicians Institute in Hollywood, California, leading to a lifetime career of recording, touring and working in the music industry. In 2016, Stephen picked up his first DSLR camera, spending nearly 2 years learning photography essentials and birding behaviors with former Kowa & Swarovski Photo Ambassador Kevin Bolton. Stephen travels throughout the tri-state area of New Jersey, New York State and Pennsylvania with a goal of achieving a unique composition of showcasing behavior and personality when photographing birds. Stephen’s photographs have appeared on Politico.com, USA Today, and won 'Fairway Markets” Best Photo Award in 2013. Stephen uses all Sigma lenses for his photography, alternating between the Sigma Sports 150-600, Sigma Contemporary 150-600, and the new Sigma Sports 60-600mm to accomplish his photography needs.