A year ago, I posted a review of the Sigma 100-400 F5-6.3 DG OS HSM | C. Since then, I’ve permanently added the lens to my camera bag. This post is an update on how I’ve integrated the lens into my kit and how it has performed.

The Sigma 100-400 f5-6.3 is a medium long zoom, it’s compact and light weight, sharp as a tack and its well built. I originally fell in love with the lens because of its light weight and what I considered to be a close to ideal zoom range for the events that I regularly shoot. What I’ve found over the past year is that indeed it has an ideal zoom range for most of the events I shoot and it does produce very sharp images.  The focus is fast and it has no trouble locking on to anything coming at me or going away.  Its nice to be able to concentrate on the 1,500 pound horse charging at me instead of waiting for the focus to lock on.

An added benefit is that because of its compact size, I can pack 2 cameras, 3 lenses, and other misc gear into my small camera bag when I head off to an event.  When I’m sharing a chase boat with 3 or 4 other photographers, the space is at a premium, and a small gear bag gives me extra room to maneuver on the boat without tripping on equipment, (at least my equipment!)

So what type of events have I shot with this lens this year? As you can see from the picture above, I’ve shot Polo, and of course I shoot sailboat racing, that’s most of what I shoot during the summer.  Now I realize that there aren’t many people foolish enough to expose their gear to an environment like the ocean, but this lens has risen to the challenge.

As I shoot with Crop sensor cameras (a Nikon D7100 and a D500),  the Sigma 100-400 f5-6.3 has an effective range of 150-600 compared to full frame.  It is certainly long enough to shoot more conventional field sports like football and soccer where you might have a substantial amount of the field between you and your subject.  Over the past year I’ve shot both rugby and polo on several occasions where I routinely need to shoot from the opposite sideline. The shot below was taken while the action was about 2/3rds of the way across the pitch.  I was still able to get in close to the action.

Here’s another shot taken from the far sideline.  This time Polo where the field is substantially larger.  The players don’t fill the frame, but I’m certainly happy with how close I could get to the action here.

I see a lot of photographers shooting with much larger lenses.  With the exception of sailboat racing, they tend to use monopods to stabilize their big heavy lenses.  With this lens, I can shoot all day and not have any issues with stability, especially since the lens has Sigma’s outstanding Optical Stabilization.  Even when my shutter speed drops down, I still get great shots.

While taking this shot, I was being bounced around due to the chop produced by both the competitors going by us and spectator boats maneuvering to get a good view of the racing.  The OS kept the lens nice and stable.

After a year shooting with the Sigma 100-400 f5-6.3, I have come to the conclusion that all of my initial thoughts about this lens were correct.  This is a light and compact lens that packs well. I can shoot all day with the lens without needing a tripod or a monopod and get consistently tack sharp images!

What are the things that this lens does right?  For one, the OS is great (I keep it on setting #1 which keeps my lens rock steady). The focus selection switch which gives me the option to focus 0 ft to infinity, 6 ft to infinity or 6 ft to 0 ft. Though I normally keep it on 0 ft to infinity, I have used the 6 ft to infinity a couple of times and love that option.  The push/pull zoom is another great option I use all the time, especially if you’re going from one extreme to the other. And did I mention how sharp this lens is?

Where this lens shines and where it fits into my kit is for those times where I want the light weight and I don’t have to count hairs at the other end of the field. I find that most of my zoom shots, even when I’m using a larger lens fall within the 100-400 range, and if I do need a bit of extra zoom, I can always use my feet or maybe a couple of large horsepower outboards to get a bit closer. 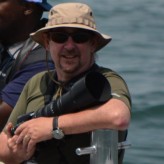