We sat down with Graham Ehlers Sheldon, Sigma Corporation of America’s newest Cine Pro, to learn more about his career, his style and how he came to be one of the earliest adopters of the Sigma cine line.

Having been born into the business, Graham’s father’s career as a producer and screenwriter moved him around quite a bit. The first time Graham remembers visiting his father at work was literally quite explosive.

“My dad had been on location, so it had been a while since I had seen him. I was already pretty thrilled just to be with Dad again. My sister and I had to go halfway up the side of a mountain to get to where they were shooting. I remember when we got there, all of the adults were looking off in the same direction. My father grabbed my hand and directed my eyes toward a winding road in the distance. He told me to keep my eyes on the furthest curve in the road. All of a sudden, a car swerved around the corner and careened off the road’s edge. The stunt man dove free just before the car exploded mid-air. I think it would have been nearly impossible for me to work behind a desk after seeing that was what a workday could be.”

Right after graduating from Indiana University, Graham began producing and shooting documentaries all over the world.  In the first few years the crews were small: most often two or three. Doc shoots took him to locations like Chernobyl, Cuba, Peru, Panama, Turkey and even to the Iditarod dog sled race in Alaska. These years gave Graham a love of travel and led to television projects for the BBC, NBC, Disney, Discovery and VICE. Since the first days of his career Graham has worked as both a producer and director of photography with his company, Stand Up 8 Productions, which he co-owns with his wife and producing partner Rin.

Sigma: What inspired you to pursue a career in cinematography and producing?

When I was first starting off, it was a budgetary benefit for documentary projects that I could also shoot.  As a producer, I was always looking to maximize each dollar of my budget. It helped that cameras had always been my passion. Having the opportunity early in my career to see beautiful and often conflicted parts of the world through an eyepiece gave me a much more intimate connection to what I was producing as well.  It’s a fairly rare hyphenate, but it makes so much sense to me.

There are production companies who only know me as a DP, and others know me only as a producer. I take pride in that because I hold myself to a high standard in both fields. I do really enjoy the times I work as both producer and DP, but as the productions have grown, I am only really able to do that with a great team in production and in camera supporting me.

What’s the biggest piece of advice you would give to someone looking to begin a career as a producer and/or cinematographer?

Never get comfortable. The death to creativity in my opinion is the feeling like you’ve done it all before.  Try something new on every shoot…Just don’t forget to test before the day. Of course we all have our favorite go-to looks and setups and styles, but absolute comfort can lead to laziness.Make sure you love doing this, because it’s hard work. Nobody got into this industry to simply cash a check, but people get into those patterns, and that’s what it can feel like. There are jobs that are much easier on your body with eight hour work days, in which you can just collect a check, if that’s what you’re after.

Putting the producer hat on for a moment… Don’t forget that at the end of the day this is a business, and that you should choose your battles carefully. Collaborate with your team, and be open to taking notes. Surround yourself with people that are better than you, and never stop learning.

What is the best thing about your job?

Getting to meet people all over the world that are passionate about their work. I’ve had the opportunity to work with grip teams in Japan and South Korea and even a drone team in Mongolia. There may be a language hurdle, but the universal feeling of really nailing a complicated oner or sequence crosses all barriers.

You also can plan for weeks for a shoot and then arrive on the day and have to pivot because of something out of your control. I love those moments. I love the problem-solving, and I love when the solution is gaff tape.

What is the most challenging thing about your job?

For me, I love what I do maybe too much… to the point that finding a work/life balance can be a challenge. In addition to that, my wife and I often work together, and she also loves what we do.  You have to be able to turn it off, and that’s another skill entirely. It’s taken us years to be able to say, “Okay, no working on these days,” but then we are inevitably dreaming up a script or a project or talking about how we’d shoot the room that we’re in.  It’s almost a disease really, but hey, nobody’s perfect. Maybe we’ll get there someday.

How have things changed in the industry since you got started?

Thankfully, I entered my career during a major shift.  We’re becoming more mindful storytellers in every aspect of production. We know that the well-being of those in front of and behind the camera goes beyond a morning safety briefing. You really do have to take that responsibility on as a department head. You have to make the work experience of your team a priority, and I think that is becoming more and more common. I hope the mindset continues to shift and our respect for each other’s worth continues to grow. I hope that a kid fresh out of school never has to be shown a piece of equipment, told how much it’s worth, and be made to feel like their life is worth risking to save that equipment. I know I had that said to me, and I’ve heard the same from several colleagues. I think we can do away with a lot of the old rites of passage in that respect. Let’s just kill that behavior wherever we can.

Productions are becoming more inclusive with every passing year, but we still have such a long way to go. We have a lot of work to do there, but I’m confident that in the next ten years, we will see crews that reflect the stories we tell, and both will be richly diverse.

How important is the gear you chose to work with?

I’m a big believer in “optimization everywhere.”  I want fewer obstacles between the story and the image. Working with more “stuff” rarely means working smarter. I love any piece of gear that streamlines our workflow in the camera department. Any gear that helps create a beautiful image simply is one I will be interested in.

Kit-wise the Sigma Cine lenses are a perfect partner for me. Scripted or unscripted, I can rely on them to be honest. In scripted scenarios, I can really put my energy into manipulating light or perfecting camera blocking. In unscripted shoots, I know I’ve got a lens that’s sharp without being too sharp; there are no surprises, nothing I’m going to need to worry about taking away in post because of the optics. This is what is crucial: gear that doesn’t make you hesitate or ignore an instinct because of some technical shortcoming or question mark.

What is your dream project?

I love anything that demands a great deal across all departments. I think it makes everyone raise their game. There are three scripts I have right now that all have really strong world-building that I would love to produce… so ya know, if anyone reading this loves investing in indie films, hit me up.

Who would you most want to work with (director/actor/etc)?

My wife and I met while getting our theatre degrees, so we love actors that come from a theatre background. Pie in the sky, it would have to be Patrick Stewart. 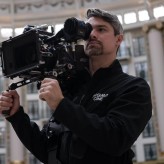