A Weekend in Chicago with the SIGMA 28-70mm F2.8 DG DN Contemporary Lens

A Weekend in Chicago with the SIGMA 28-70mm F2.8 DG DN Contemporary Lens

Big cities not only fill me with wonder and excitement, but also countless photo ideas. Zipping past Wisconsin farm fields on the Amtrak Hiawatha headed toward Chicago, numerous photographic possibilities kept popping into my mind.

And sitting beside me, locked onto my Sony A9 II, was the new SIGMA 28-70mm F2.8 DG DN | Contemporary lens. This lens, so small and lightweight, looked as if it was designed for travel. The lens and camera fit easily in my backpack, joining my iPad and a Platypod (a flat tabletop tripod) for an adventure in the the big city.

It was also a change from past trips because even with some Covid-19 restrictions still in place, I could travel from Wisconsin to Chicago. A chance to venture out again, observe, record, and share life.

As the train pulled into Chicago’s Union Station, I made a major change to my shooting game plan. Usually, I like to consider the various aspects of the lens I’m shooting with and take photos that will specifically accentuate them. But now, I just wanted to let my creativity run wild and let the pictures happen, knowing that would be the best way to show you what this little lens is capable of producing.

During previous trips to large cities, I would often only take a prime lens. Photographing in a city usually brings out the street photographer in me, pushing my creativity to see life through a single focal length.

But sometimes, traveling opens my creativity to more than what just one prime lens can capture. This time, I wanted flexibility to shoot wide as well as tight, and let my creativity feel unlimited.

The following images show not only what I felt compelled to capture during my brief trip to the city, but also how truly versatile the SIGMA 28-70mm F2.8 DG DN | C can be for travel.

Heading back home, and reviewing my photos on the back of the camera, I was happy with what I saw and was able to capture. The real truth, however, is reviewing them on the computer at full size. And that displayed the sharpness of the little SIGMA 28-70mm F2.8 DG DN | C. Not only small and light, but fast to focus and very sharp images. Oh, and did I mention easy on my budget? I think I have met my new travel companion. 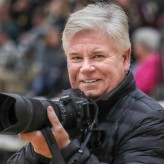