As a pro adventure sports photographer, it might come as a surprise to many, but I don’t shoot organized sports events and competitions very often. In fact, one of the only events that I do shoot is a six-day mountain bike stage race called the Breck Epic. Why do I choose to shoot this race? The easy answer is because it’s in my home town and I like showing off our fantastic trail system. But it goes deeper than that. I really enjoy shooting the Breck Epic because it’s a great challenge and digging deep in the tips and tricks tool bag.

With 600 racers riding around on some of Colorado’s best trails you would think it’s a cinch to capture great images. And it is…kind of. The height of the action typically takes place in the middle of the day and often times in deep forest making for intense contrast that can be hard to deal with photographically.

It would also be easy to get lots of technically and aesthetically similar looking shots and for some event photographers, this is exactly what is called for–finding the perfect corner and nailing the shot as each and every participant rounds the bend–but that was not my assignment this time out.

This year’s objective was similar to past year’s, but this time with a twist. As always with the Epic my job is to create photographs that tell the whole story of the race. Action shots, portraits, candids, and basically everything that happens during the six days. This time though we would be working as a full media team to putting out a full set of photos and videos every day. For my part I would be tasked to help define the most interesting parts of the trail and then be sure they were covered by a photo/video team. The landscapes, the backdrops, the scenery, all of these are as important as the action in this visual storytelling assignment.

So let’s focus in on how to create a variety of looks to help tell the story. For starters I used a variety of Sigma lenses including the 12-24 F4 Art, 24-70 F2.8 Art, 24-105 F4 Art, 70-200 F2.8 EX, 100-400 F5-6.3 Contemporary, 150-600 F5-6.3 Sports. With those lenses I employed a number of techniques including panning, zooming, on camera flash, framing, off camera flash high and low camera positions and even rotating the camera during exposures!. Many times, I would combine more than one of these techniques to create some unique looks. Below are a few examples

I love using my super wide-angle lenses to set the scene and tell the story.

Another ultra wide but this time using a strong foreground element and some leading lines.

Here, a flat tire sidelines a racer while another racer passes him by. I got super low to the ground so the viewer would have the same perspective as the racer fixing his flat. (How did you meter this to make sure your exposure was on riders, not sky?)

Showing motion is a great way to showcase the speed racers ride at and adds a great visual element. There are a few ways to do it. First, you can “lock-off” your camera and use a slow shutter speed as seen below. This makes for a sharp scene and speed blurred racers.

Another way to do it is to pan with the riders creating a sharp racer and blurred background. These shots can be tricky and take some practice to get it right. If you are using a Sigma lens with OS be sure to use it. And if you have OS 2 on your lens even better as that is specifically made for panning shots.

Another panning shot using natural light. Panning at the same speed of the rider is challenging and may take a few shots to get it right.

Using flash is another great way to add variety in your images. You can use either “on camera” flash or using triggers you can get your flashes “off camera” for a different look. Below I am both panning and using off camera flash. This gets the background blurred, keeps the racer super sharp and also fills in the shadows in an otherwise dark forest.

Another shot using off camera flash but this time I used a high sync speed enabling me to shoot at 1/800 sec. which kept everything sharp.

On camera flash can be direct and sometimes overpowering but it is fast and easy to set up and you never suffer the reliability problems that sometimes plague trigger systems.

Here is a slightly different take using on camera flash. To create this image, I quickly rotated the camera during exposure to create motion that centers on the rider.

This shot had me twisting the flash element slightly to the right so it would be on the riders and not the sign. And yes, that’s a tandem (aka the divorcycle) being ridden.

Framing is a great way to focus attention on your subject while also adding depth. In the image below, I was able to get a double frame. First, I shot through some pine boughs to create a natural vignette. Then I got the following rider framed between the arm and hip of the lead rider…too cool!

In this shot I have the riders framed in my side view mirror. Looking back, we see them and looking forward we see where they are going.

In this shot I used the fencing on a bridge to frame the racer. I also used a slow shutter speed to show some motion blur.

Shooting the character and characters of the race is also very important. Portraits, candids, the bacon station on Wheeler Pass and the Skittle feed on French Pass, blood and guts are all important components of this great race.

Let’s Get Telephoto With It

Super telephotos have their place in a race too. Here I used the 150-600 to pull in the giant red rock wall behind the riders. The riders were about a half mile away while the rocky backdrop was about 4-5 miles distant.

Lets be sure to mention the venerable 70-200 f2.8. I give this focal length a special shout out as I view it as one of the most important lenses for the outdoor sports shooter. Starting at the 70mm mark it’s great for sense of place shots like the one below.

And of course it’s great for panning too. I used a slow shutter speed and OS 2 to capture the rider sharp and keep the background blurred.

Here I’m using it as a story telling lens by keeping the sign sharp and throwing the rider out of focus using an f3.5 aperture.

At longer focal length the 70-200 can pull in the background nicely.

Framing the action at 200mm.

Nicely layered shot with the 70-200. Foreground color element with the racer in the mid ground and mountains as the backdrop.

After six days of heavy shooting I was exhausted. Each day began with a meeting at 7:15am followed by shooting till 1 or 2 o’clock on the afternoon. After that is was off to the edit chamber with image deliveries due no later than 5. After that it was a 6pm meeting to plan the following day. Shooting creatively during all this is made easier by using a wide variety of Sigma lenses from 12mm to 600mm. Add to that some of the techniques described above and you have a recipe for epic outdoor storytelling! 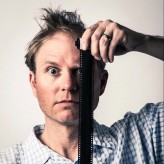