No, I won’t be delving into the (surprisingly brief) history of Take Our Daughters and Sons to Work Day, nor will I be bringing my two boys to the Sigma offices to pillage the jelly bean bowl or harass the geese that wander freely in the parking lot. Our New York office is unfortunately closed at the moment, and the entire Sigma U.S. staff is patiently working from home until we are cleared to return.

Instead, I summoned my sons (Andy, 9 and Danny, 6) into our home office in between video conferences and gave them a simple assignment that is at least somewhat related to what Daddy does for a living… let’s go outside and shoot close-up photos!

Of course, this task did not begin without some resistance. After all, it was practically noon and whyyyy does one need to change out of their pajamas so early in the day? Having just put on actual pants myself, I had no argument except for “because I said so” — and indeed, with that old parental chestnut, we changed into our casual wear, grabbed our cameras, and left Mommy alone to enjoy her Zoom calls in peace.

The gear? My getup included the SIGMA 70mm F2.8 DG Macro | Art, affixed to a Sony A7 III. The boys brought along their Nikon Coolpix P300 and Canon PowerShot ELPH 180 that, although not noted for their extensive macro capabilities, I did get for free.

Stepping outside, there was one final hurdle to clear to get this small project underway. A suburban street in early April in the midst of a pandemic is not exactly brimming with obvious photographic opportunities, a fact that was quickly pointed out by the younger brother. “What are we supposed to take pictures OF?” Danny asked.

At this point, I asked him to take a picture of the dandelion at our feet. Ok. Big deal. It’s a dandelion. But what if (getting right down on the crabgrass) you took your camera, got really close and focused carefully on the flower — see, your camera even has a little flower icon — and took a picture from this angle?

Sensing that something potentially cool had happened without him, Andy rushed over to inspect his sibling’s work. “Oh, that’s AWESOME!”

One photo changed everything.

After that, what was an annoying request by a dad who always takes too many pictures became an adventure. The front yard alone — teeming with dandelions and other interesting weeds — was a treasure trove of subject matter. The back yard — the domain of our small flock of chickens — was equally loaded with opportunities to capture photos of plants, insects, weird pebbles, random toys, and more.

Overall, while the Bagel Bites warming in the toaster oven did eventually lure us away from our photo project, it was time very well spent. This quick exercise showed our boys that a simple change in perspective can reveal details that you never knew existed, a concept that can be applied to photography as well as life.

And so ended our 2020 version of Bring Your Kids to Work Day. Since then, both boys have been eager to practice their new skills on additional backyard flora and fauna, art supplies, matchbox cars, or anything they can find with interesting textures or surroundings. Of course, this particular fascination won’t last long, but I think the overall lesson made a positive impression, and I’m looking forward to seeing how Andy and Danny are able to shift my perspectives in the future. 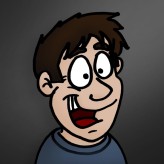