This will be an in-depth lighting breakdown for an LG OLED Commercial shot last year, 2018. This was a studio shoot, in a very small space. The director of this project was simultaneously working on the stills campaign for the same product. Needless to say, this created some challenges. Not least of which was the fact that the room had almost no grid, except for a single truss at the far-left wall.

In order to achieve this look, considering the space constraints, we chose to shoot the commercial using a Motorized Precision Kira Robot arm. The Kira provides repeatable and controlled movements that were completely smooth. However, our camera movements were limited to the reach of the arm.

The product is a 65” TV, which in a small studio space doesn’t leave much room to move. In order to feel a camera movement and/or see the entire product, we shot on a Sigma Cine 14mm T2 prime lens for any shot where we needed to see the entire TV.

We lined the right side of the frame with a 12×12 half grid and put our more powerful lights further from the wall and cascaded the size of the units toward the wall, allowing the fall off to do the work in regard to evenness of the white background.

The light slashes were done with simple lekos, one on the grid and one parked on a stand. We had a 2k tungsten shooting straight down, riding on a jib, hanging out over the robot to give me the ability to quickly have an overhead key.

This shot was one of the dark looks for the LG OLED spot. We took the camera off the Kira arm and mounted it on a JIB with a remote head. The slashed of light were simply two lekos on swivels, with two very coordinated lighting technicians operating them.

The Sigma Cine 14mm T2 was used to see as much of the product as possible with a low ceiling. The small flourishes of light happened naturally as the product has a large glass face and nearly mirror polished body. I love this shot.

This is another look using the Kira arm and the Sigma Cine 14mm. We used a Jib as a moving key light in combination with some motion control on the robot. I love this shot because it’s a mixture of the absolute mechanical perfection of the camera movement on the arm, mixed with the human touch of a light being manually operated on a Jib.

Next up is a spot for Tom Ford. This piece had very specific technical requirements. In order to ensure the entirety of the set and product were in sharp focus, a maximum amount of depth of field was necessary

This was shot on the RED Helium sensor, but at a 4K HD crop out of the 8k sensor at ISO250. This gave me two benefits. First, we were able to stay at nearly a super 16mm sized area of the sensor. Second, the depth of focus benefits really helped me keep the whole subject in focus. We shot on the Sigma Cine 50mm at T16.

The director, Mitchell Feinberg, wanted a dancing, sensuous light. We used a Stella LED light and bounced it into a piece of silver mylar which was hand manipulated. We were able the focus the beam into ribbons of light that were intense enough to register at T16/ISO250, and had the energetic movement of a hand held unit.

Regarding the color, we shot it all in gold and the rose color was graded later. The intent was to really capture the sheen.

Ultimately the product shot of the campaign was the packaging. It was suspended above a pool of gold paint. I used a Quasar light with tow 4’x1’ black foam bore pieces to just kiss the top of the box and help separate the tones from the backdrop.

The gradient was created by feathering a 2k open face Par with a black wrap cutter very close to the source, then feathered even further with a double to make the soft edge on the P95 background. P95 is a kind of white semi translucent plexi. The key is using the same LED bouncing into a rigged piece of silver mylar. Shot again at a deep stop to ensure focus across the whole product. We used the Sigma Cine 85mm T1.5 with the 4kHD patch of a RED Helium sensor to get more depth of field.

Shellac NYC cut and graded this, taking the gold colors of the paint and set pieces, making them take on the cherry color while keeping the metallic gold look. The box however was the cherry color. 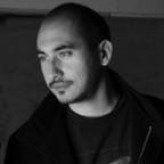